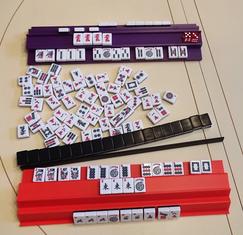 Formatted for easy copying and printing

Two players face each other; and place 2 racks in front of each player.
(FOR INFORMATION ON THE 3 or 4-HANDED VERSION OF ROYALE SIAMESE MAH JONGG®....PLEASE SEE BELOW)

2.WALLS
Build two (2) full walls of tiles, 19 stacks long, parallel to each other. When playing with 2 separate regular racks, then stack one wall of tiles against each wall. When the tiles from the outside rack have been used, just move that rack behind the other rack.) When playing with 2 Double Siamese racks, then stack 2 walls against the back edge of the double rack, with the pusher between the walls. (rev . 5/27/19)

3. WALLS: **AN EASY OPTION for social play: Don't build any walls. Merely leave the shuffled unpicked tiles on one side of the table, and discard on the other side of the table.**
(WALLS ARE REQUIRED FOR TOURNAMENT PLAY.)

4. OPTIONAL: EAST THROWS THE DICE TO BREAK THE WALL.

Each player deals themselves four (4) tiles from one of the two (2) walls in front of East, until East has taken their last four (4) tiles which would give East 28 tiles. Player opposite then takes three (3) tiles, which gives him/her 27 tiles.

Players may arrange their tiles in both their racks...as many as desired; and may exchange tiles back and forth between their own racks. It does not matter how many tiles are on each rack at any one time.

There is NO Charleston
(NOTE: You have plenty of tiles and a multitude of tile combinations over which you have control.)

East discards the 28th tile to begin the game; then the opposite player picks their first tile from the wall; then discards a tile; and so on. Picking and discarding proceeds.

You may exchange your own Jokers from your own exposures, or from your opponent’s exposures; but you can NOT exchange a Joker from any existing EXPOSED Mah Jongg hand. Jokers may be exchanged from exposures in a “dead” hand, IF that exposure did not cause the hand to be declared “dead.”
(PLEASE NOTE: SEE 3 & 4 HANDED Royale Siamese Rule below for Quint Hand with NO Jokers)

Once a Mah Jongg is declared and exposed with the required 14 tiles by a player, and that player has discarded a tile to complete their turn, player may continue to keep their remaining tiles on one or both of the slanted portion(s) of their rack(s).
A. STRATEGY NOTE: The disadvantage of not exposing your own MJ is that the game might finish before you have declared your own Mah Jongg; and you must have a Mah Jongg exposed in order to be paid. You won’t be paid for a MJ that is still IN your rack, not ON your rack.
B. The longer you delay declaring a Mah Jongg and exposing those tiles, the longer you are able to use your own Jokers interchangeably.
C. Remember, once the Mah Jongg hand has been declared and exposed, the Jokers in the MJ exposures can NOT be exchanged.
D. A DISCARDED TILE IS CLAIMED FOR MAH JONGG BY 2 PLAYERS: the discarded tile may be claimed by the player CLOSEST in succession to the discarder....regardless if it is for a 1st or 2nd Mah Jongg. (A 2nd Mah Jongg does NOT take precedence in this case.)
E. MAH JONGG IN ERROR. If a player claims two (2) Mah Jongg's at the same time, but literally has only one (1) actual Mah Jongg, then that one (1) Mah Jongg will be honored; and the other hand will be considered "dead."

11. YOU ARE PLAYING BOTH RACKS INTERCHANGEABLY

Even though the TILES ARE INTERCHANGEABLE between the racks, players must be cautious to NOT combine their exposures on the WRONG Rack. A player's hand should be declared "dead" if the combined exposures do not match a hand on the NMJL or Siamese cards. Remember, the tiles are interchangeable IN the racks, not ON the racks. However, the player may continue playing to try to build a 2nd Mah Jongg on their 2nd rack.

and "dead" player pays opponent 4 times the value of opponent's existing Mah Jongg, or 4 times the lowest value on the card - whichever is relevant.

the game continuesby the opponent only - until opponent makes a second Mah Jongg, or all the tiles have been picked.
(NOTE: In a regular 4-handed NMJL version, the “dead” player has to cease playing, while everyone else continues. But, think of the other player’s 2 racks in the 2-handed version as 2 individual remaining players. If one hand is “dead,” there are still players alive.)

when the tiles from the walls have been used, and the last discard has been made.

15. IF A PLAYER HAS 1 "DEAD" HAND EXPOSED that player may continue to exchange the remaining tiles between the two racks, but may NOT USE any of the tiles from the exposures that MADE the EXPOSED HAND “dead” – in order to build another hand. Jokers may be exchanged from exposures in the “dead” hand, only if that exposure containing the Joker did not cause the hand to be declared “dead."
(COMMENTS and Clarification):
A. Player may NOT replace any of those previously or currently exposed tiles back into her hand. Those tiles MUST remain exposed in the rack;
B. Player and her opponents can now only exchange previously exposed Jokers, and only if they were exposed legally and PRIOR to the incorrect “MJ” exposure;
C. Even if Player now uses more than 14 tiles that are left in her other rack to build another MJ……she will NOT win the game with a 2nd MJ. She can only build a 1st MJ now; and she won’t receive the bonus for a 2nd MJ.

17. SCORING AND PAYOUTS: Payment is made at the END of the game(s), and is strictly paid based on the number of MJ's you and your opponent have.
For easy payouts, KEEP SCORE. At the end of the game(s), the player with the lesser score will pay the winner the difference between the two (2) scores:
A. The 1st Mah Jongg by a player receives the value on the NMJL card, regardless if it is
self-picked, but if it is JOKERLESS, the value is doubled (excluding singles and pairs).
Reminder: The Payer is not penalized for throwing a tile that is claimed for Mah Jongg.

C. A player who declares and wins with two (2) Mah Jonggs AT THE SAME TIME receives double the score for both hands.  IMPORTANT: One or both of these hands may have had previous exposures.

D. The player who discards a tile that is claimed for their opponent's 2nd Mah Jongg is penalized minus Twenty Points (-20); whether or not there is a first Mah Jongg already exposed on their opponent's rack.
(Also see Rule 17. E. below)

E. The player who discards a tile that is claimed by their opponent who puts up two (2) Mah Jongg's during the same turn...but the claimed tile is used in the 1st Mah Jongg exposed.... the discarder is still penalized minus Twenty Points (-20).

18. TOO MANY OR TOO FEW TILES ON PLAYER'S RACK

A. If a player has 1 legitimate Mah Jongg exposed on one rack, but too many or too few remaining tiles in their 2nd rack, they should be declared "dead." Too many tiles gives the player an unfair advantage to achieving a 2nd Mah Jongg to win the game; but receives points for the one legitimate Mah Jongg. Opponent continues to pick tiles from the wall.

B. If immediately after the deal it is discovered a player has too many tiles on their racks (more than 28 if they are East, or more than 27 if the are not East)....it is a mis-deal. Just re-deal the tiles

C. If it is discovered during play that a player has too many tiles (29 tiles after picking to begin a player's turn, or 28 tiles not during a player's turn), that player should be declared "dead." This Rule also applies to too few tiles.
Please also see RULE 12.

D. It should be noted that if a player actually discards a tile before picking up a claimed discard or taking a tile from the wall to begin their turn, then the player has too few tiles on their racks, and should be declared "dead." (11/20)

C. The MIS-NAMED discarded tile may be claimed for MAH JONGG. The discarder is penalized the appropriate amount of points. PENALTY: Minus -25

D. If the mis-named tile is claimed for a 2nd Mah Jongg, then the discarder is also penalized the extra -20 points.

20. PICKING FROM THE WRONG WALL or WRONG END OF THE WALL l
A. If a player picks and racks a tile from the wrong wall, then that player will have one (1) hand declared dead. If there is already a MJ hand exposed by that player....then the player's 2nd hand is dead. Player stops playing. Other player continues.
If the erring player has one hand with exposures, then that hand is dead.
If the player has 2 hands with exposures, then the hand on the rack closest to that erring player is dead.

B. If player picks from wrong end of the wall and and subsequently RACKS or discards that tile, then that player's hand is “dead.” If there is already a MJ hand exposed by that player....then the player's 2nd hand is dead. Player stops playing. Other player continues.
If the erring player has one hand with exposures, then that hand is dead.
If the player has 2 hands with exposures, then the hand on the rack closest to that erring player is dead.

C. However, if the mistake is not discovered until after more than one player has picked from the wrong wall or the wrong end of the wall, then the game continues and players continue picking from that wall. This is to insure the continuity of the game. (11/20)

PLEASE NOTE: Some Rules for ROYALE WITH 3-4 PLAYERS....
MAY be DIFFERENT
than for only 2 players

NOTE ABOUT THE "ATOMIC CAT" HAND
You MUST start with 13 tiles (just like you would in a standard NMJL games)....and wait to pick or claim your 14th tile. "Atomic" is an official hand on the Siamese Card...so you don't have to worry about various house rules gumming up the works. You must declare "Atomic" immediately after the deal. It will be on your first rack, closest to the center of the table. You can only use Jokers and Flowers for the 2nd hand. And you CAN'T move tiles back and forth between racks.....unless you go OFF atomic. We don't want to make it tooooo easy when you have 14 tiles for Atomic, do we....?

SIAMESE is growing exponentially in popularity, number of players, and even in number of Countries where it is played. Kids love it, high school and college kids are playing it. Some regular Mah Jongg players are splitting their days, playing regular MJ in the morning, and Siamese in the afternoon.